The Narendra Modi-led government has made a comeback in India. For healthcare, its second-term return greenlights an ambitious health insurance scheme—Ayushman Bharat. The government, over the next five years, intends to provide health insurance cover to the 500 million poorest in the country. Meanwhile, private insurers have a plan of their own. To boost the most profitable kind of health insurance—the one that individuals buy.

There is tremendous scope for health insurance in general to grow, but individually-bought health insurance is the most unpenetrated market right now. Indians with disposable incomes have opened their wallets for fast-growing industries such as e-commerce and fintech over the past five years. Investors are now betting that the next five will be the right time for insurance, especially health, to become a want. Not just a need that corporations and the government traditionally provide. Divya Sehgal, an investor, goes as far as using American psychologist Abraham Maslow’s ‘hierarchy of needs’ pyramid theory to explain the motivation behind investing in health insurance. Sehgal is a partner with the PE firm True North which bought a 51% stake in insurer Max Bupa in February this year.

Now, according to Maslow’s theory, once the human needs for food, shelter and clothing are met, safety comes next. “Every person would spend more on premium to cover themselves from basic risks,” Sehgal says. Insurance, particularly health, may have been a low priority for Indians up until now (as it is an evolved need), but this would change as purchasing power rises, he expects. The evidence supports the hypothesis. Life, motor and other general insurances are not as high a priority on Maslow’s pyramid, and so, they’re seeing relatively slower growth.

This vision isn’t limited to Sehgal either. A consortium, led by Mauritius-based investment firm WestBridge Capital and Indian billionaire Rakesh Jhunjhunwala, got approval from the government’s statutory body Competition Commission of India (CCI) to buy over 90% stake in health insurer Star Health in April this year. Similarly, private equity TPG-backed hospital chain Manipal Hospitals bought out the 31.5% stake of Indian business group TTK from Cigna TTK health insurance, resulting in a name change to Manipal Cigna in the first week of this month. HDFC Ergo general insurance, meanwhile, has been in discussion to buy a stake in health insurer Apollo Munich over the last few months, said an employee of the insurance company. Reliance Capital got approval for a health insurance company back in October 2018. According to two persons in the know, the Mumbai-based conglomerate Bajaj Group (that operates Bajaj Allianz General Insurance) has, since 2001, been planning to launch a standalone health insurance company. However, the company itself hasn’t confirmed this.

All of them expect younger Indians to fall sick more often as time progresses. They realise the importance of health insurance—inpatient and outpatient. California-based fitness technology venture GOQii that manufacturers wearable fitness band indicated that 38.3% of people between the age group of 20-45 suffer from at least one lifestyle disease ranging from diabetes, high blood pressure, cardiac issues to thyroid, acute gastrointestinal issues and acidity; and this number could go up by another 15%, as per India Fit Report 2019. The health insurers plan on aggressively getting Indians to buy health insurance and incentivising fitness by offering discounts on premiums.

However, as one of the former senior executives of a leading health insurer put it, “Insurance is neither e-commerce nor fintech. It is hard to sell the promise of security for risk one cannot imagine and even harder to make it profitable when it reaches high scale.” He requested anonymity as he is bound by a non-disclosure agreement.

Many foreign investors are wary of investing in Indian insurance because only 49% foreign direct investment is allowed. It means the investor would have to take more risk with less operational control

Even with plans for aggressive growth, health insurers are nowhere close to the finish line. Let’s look at hard numbers. True North plans to grow Max Bupa by 5X in the next six-eight years by focusing on providing health insurance to individuals. Similarly, health insurers that The Ken spoke to expect the individual insurance business to grow from the current 33 million users to 150 million over the next five years. Now, both individual and group businesses have about doubled during the last five year period; with the optimistic 5X growth expectation, for both group and individuals, 600 million (450 million group health insurance users) would be insured. Add this to Ayushman Bharat’s targeted 500 million. Together, the projected 1.1 billion insured would cover about three-fourths of the expected Indian population of 1.4 billion in 2024.

Sounds great. But these are optimistic targets. In reality, the health insurers plan to grow not just by adding more users but, in part, by adding more value-added services to their current users’ schemes and focusing on the profitable individual business rather than the loss-making group business. 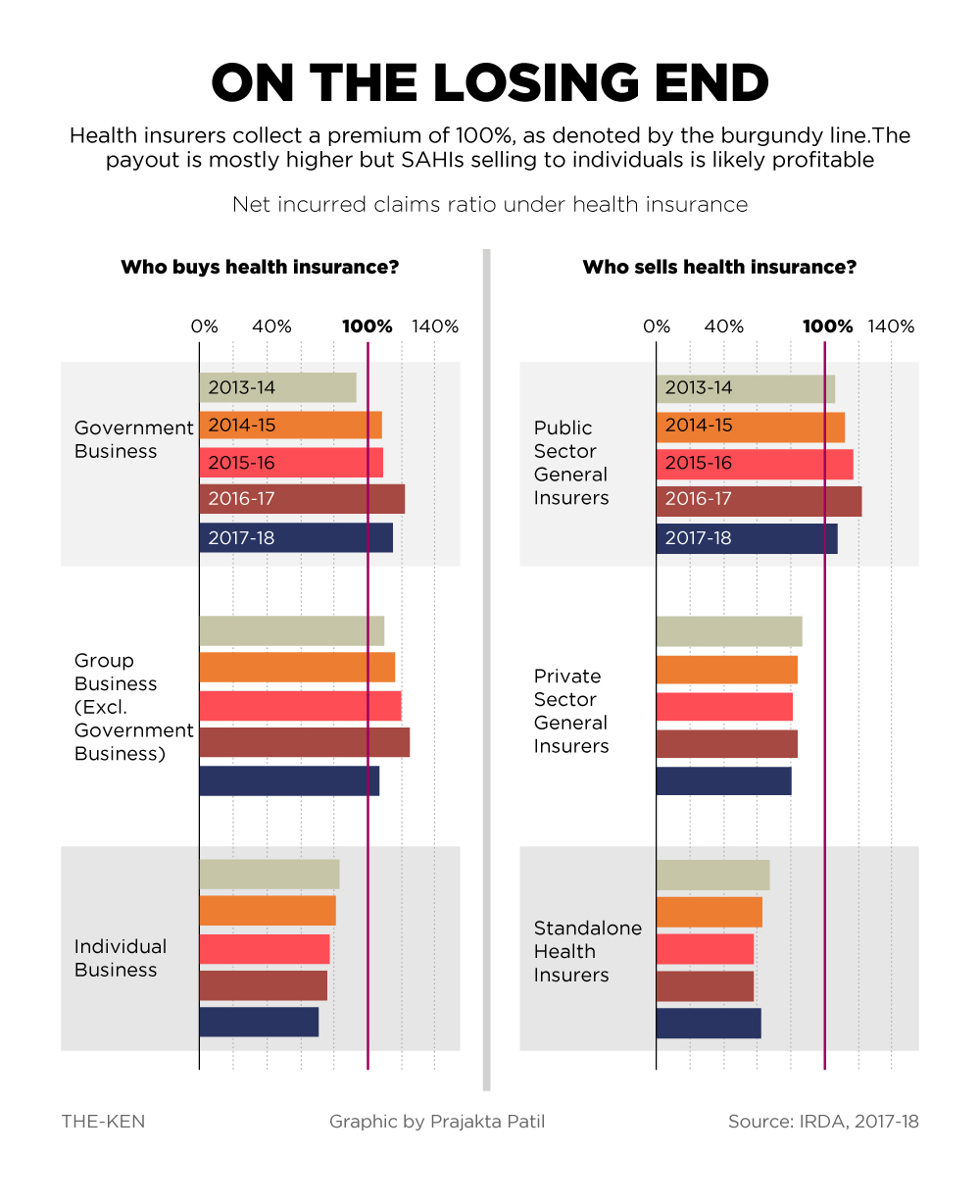 The most profitable business is the individual business, but it is the hardest to scale. Group business and government schemes bring in scale, but since the premiums are negotiated, they often result in losses. Which is why Sehgal sees a growth story “overwhelmingly higher than other health insurers” in Max Bupa, as over 97% of its business comes from individuals, which keeps the claims ratio under control. Sehgal believes now is the time to boost individual health insurance sales and increase True North’s value of Rs 1,001 crore ($144 million) to over Rs 5,000 crore ($719.6 million) in the next six to eight years.

To achieve that, he plans to digitise more processes and start innovation in a new category—outpatient (OPD) insurance, which would be an uphill climb for True North.

Aetna, American-managed healthcare company that also sells health insurance, entered India in 2016 by making its first investment of Rs 100 crore to expand an OPD subscription product. The product was developed by the Indian Health Organisation (IHO) which offers primary care, discounts on pharmacy and diagnostic bills and most importantly, medical advice. Aetna had acquired IHO in 2011.

The apprehension around promoting new innovation is low in insurance because of the probability of high claims ratio, points out Prashant Tandon, co-founder and CEO of e-pharmacy 1mg that has tied up with Max Bupa and general insurer ICICI Lombard to manage their new OPD insurance products. Health insurance has faced high claims ratios in the past; the OPD is more susceptible to overuse, high claims and high payouts once patients start to demand regular doctor appointments and diagnostic tests. Which is why insurers are still testing the waters. Tandon does not share any numbers but says it is only recently that those who have bought the OPD policy have started filing claims at 1mg for medicines and diagnostics.

For now, the insurers are just trying to upgrade existing users to higher-value products, said an ex-senior executive with a health insurance company, who requested anonymity due to a non-disclosure agreement. Although almost all insurers have applied for approval for OPD insurance products with the insurance regulator, none have started marketing these products to the masses, he added. The Ken has previously reported that Max Bupa, Apollo Munich and ICICI Lombard had launched their products and that the PolicyBazaar Group had planned to start marketing its OPD product by the end of last year. They’re all yet to advertise their products. Once they do, it would mean developing a distribution network to expand coverage as the online direct sale of health insurance is still low in India. True North plans to expand from its current metro cities focus to every city with 2 million+ population. 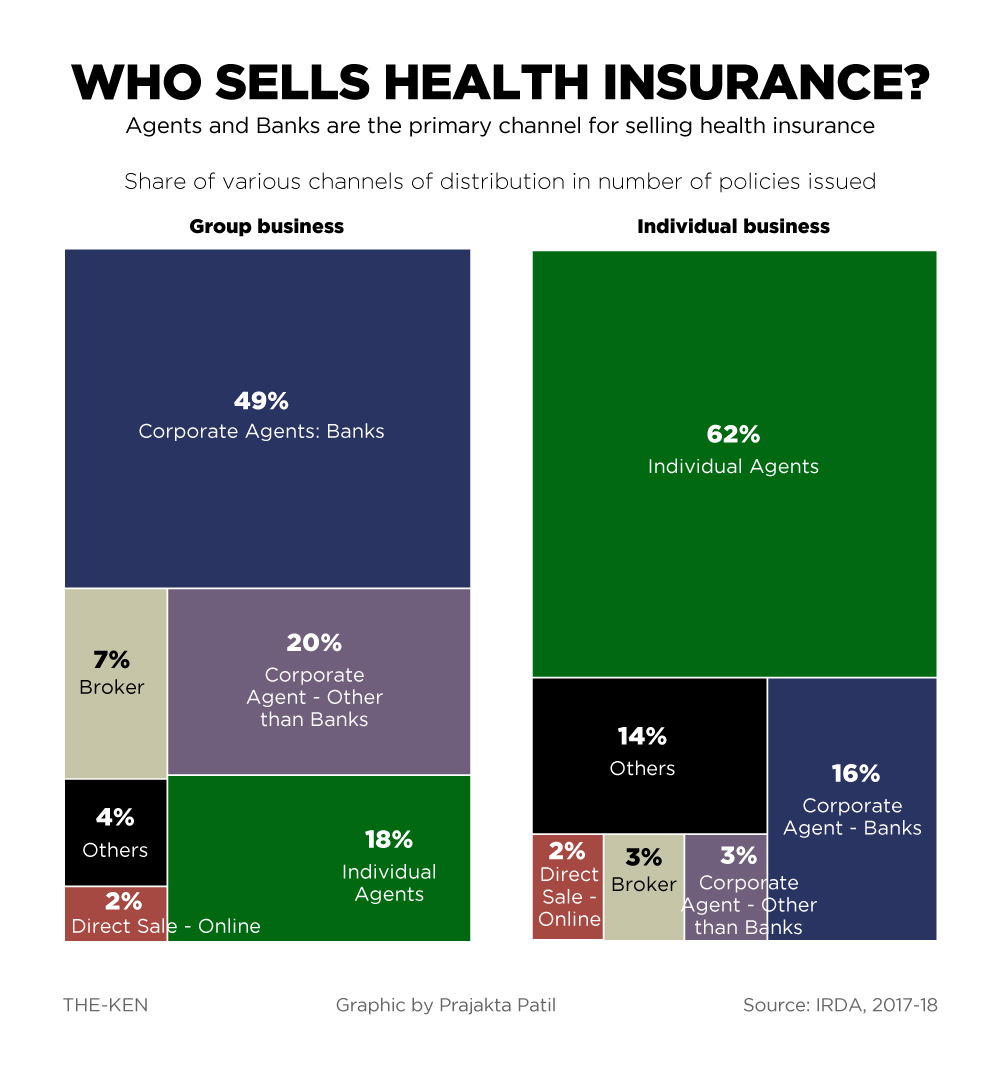 A person, not a car

Vaidyanathan Ramani, head of product and innovation with PolicyBazaar, believes that even though the opportunity in health insurance has been evident for about a decade, there has also been a lot of apprehension about selling it.

General insurance companies, which are allowed to sell various non-life insurance products, have been unable to grow as fast as standalone health insurance companies (SAHIs) such as Apollo Munich and Max Bupa. Ramani, who was head of strategy with Royal Sundaram General Insurance before he joined PolicyBazaar, says that the reason is that travel, home, motor, etc insurances are managed in one way and health in another.

For instance, a motor insurance premium can be estimated based on the quality of the car and how one drives it, but not health insurance. “I am burdened with you for 365 days till you come for renewal next year. If I feel I have made a wrong call with you, I price you correctly next year. In health insurance, you are with me till you die and I can’t leave you and I know you are only going to grow old and fall ill more often. I will price thinking what will happen to you for the next 25 years,” Ramani explained. The variables in health insurance are very high as one can be affected by mild to severe communicable, non-communicable and lifestyle diseases; healthcare costs can increase more than expected and one can fall ill anytime between the first or the 25th year, he added.

In health insurance, you are with me till you die and I can’t leave you

These are the few reasons why general insurers have focused on providing group insurance to companies that make a promise of one year and bring in a large customer base to grow, but they have now realised that these are very competitive and are often unprofitable. A former senior executive with a third-party administrator (TPA) (which administers policies for health insurers) said that these factors led health insurers to harden premiums about two years ago. When the premiums almost tripled in some cases, for instance from a Rs 700 ($10) premium for a basic Rs 1 lakh ($1,439) policy, the average premium rose to above Rs 3,000 ($43), she added. 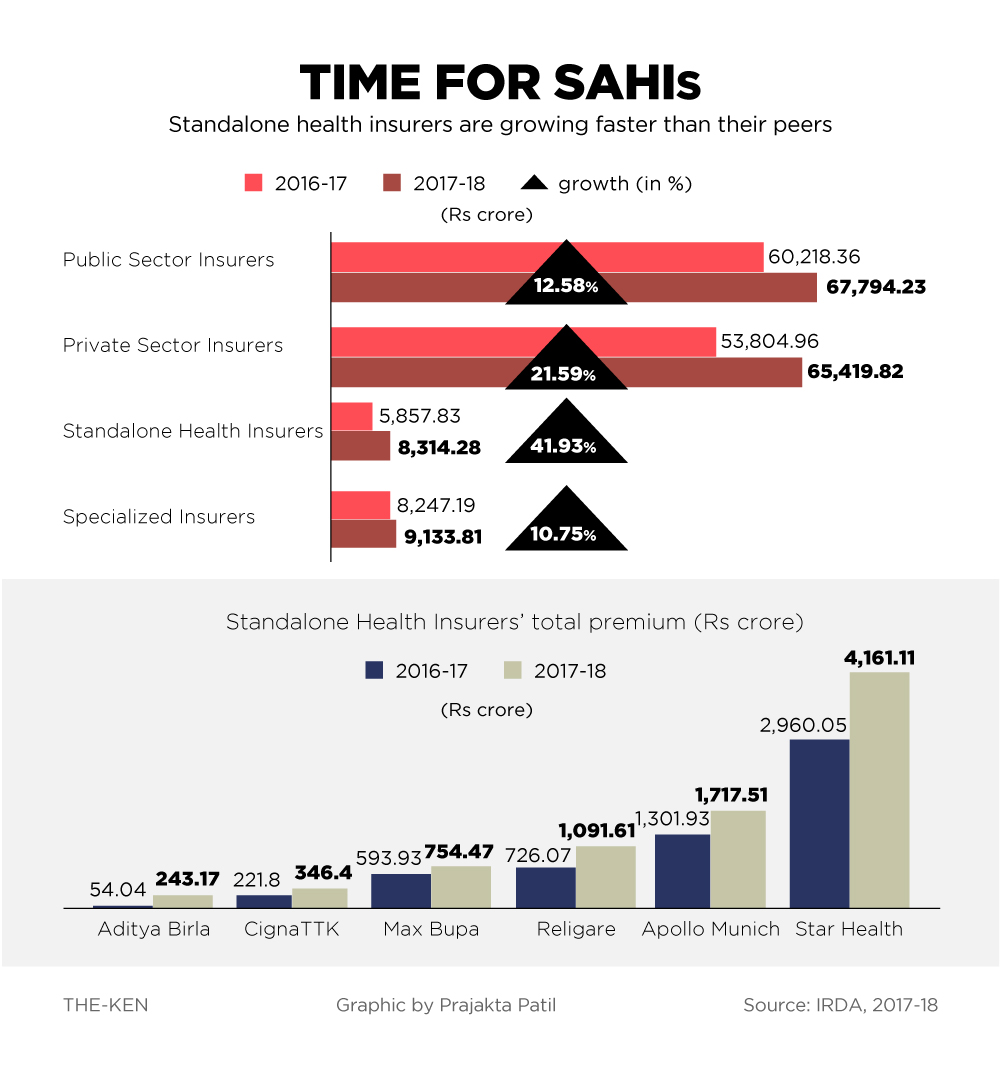 She also pointed out that one of the reasons SAHIs have grown faster than general insurers in the health segment is because they carry brand names of hospitals such Max, Apollo and Religare (which belongs to the same group as Fortis Hospitals). Going forward though they may have it rough as True North plans to phase out the hospital brand name Max. Inversely, if the insurance regulator allows HDFC Bank’s joint venture with Germany based insurance group Ergo to acquire India’s largest hospital chain Apollo’s stake in Apollo Munich, it would suffer from a loss of branding.

No one recognises Apollo Munich, they just recognise Apollo. It grew due to the brand. Further, Apollo experimented a few products and initiatives in hospitals before taking them to the market

The former senior executive with a health insurance company, quoted above, calls it a chicken and egg situation. (The executive recently left the company to build a chronic disease management company that could work with health insurers in the future.) Traditionally, insurance has been driven by TPAs, agents and banks;  health insurers don’t believe in grand marketing, as it is rare for anyone to go buy insurance. People would much rather put it off for another day. It is a market that requires patient capital, he adds. PEs are buying into these companies, he says, adding that they will soon realise “selling anything in India is hard but selling insurance is the hardest”.

Correction: An earlier version of this story inadvertently attributed quotes by Divya Sehgal of True North to Ashish Chandra (of True Cover). Additionally, the word Group has been added to PolicyBazaar with regard to its OPD plans, for greater clarity. We regret the errors.